Thanks to this article on Medium I recently found out that Google Cloud Shell can also be a pretty decent development environment depending on your use case.

What is the Cloud Shell?

Cloud Shell is a Linux terminal available on the Google Cloud Platform (GCP). As its main goal, Cloud Shell allows you to manage your projects and resources on GCP in your web browser, without having to install the Google Cloud SDK or other tools on your machine.

When Cloud Shell is started, a pre-configured virtual machine running a Debian-based Linux operating system is provisioned and you are given access to a Docker container running on top of that. So, we can use Cloud Shell for many of the things we would use such a machine for, but with some limitations, as explained later.

You can open the Cloud Shell with an icon in the top bar:

After a couple of seconds, it will be available to you:

You can press the icon shown in the previous image to open the Editor. It is very basic, but it should be enough for many use cases. 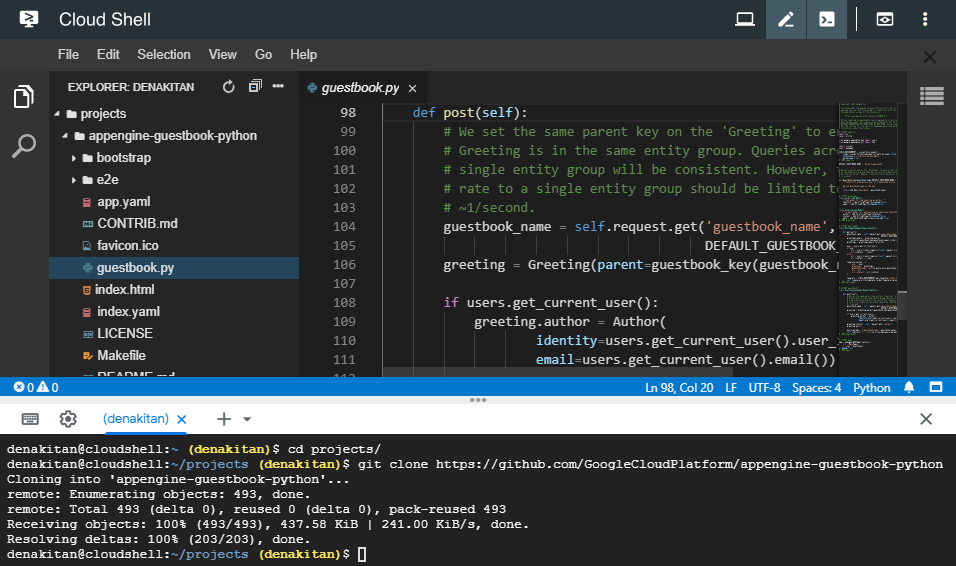 In the example below, I'm running a sample application from the Cloud Shell documentation that starts a web application on port 8080. 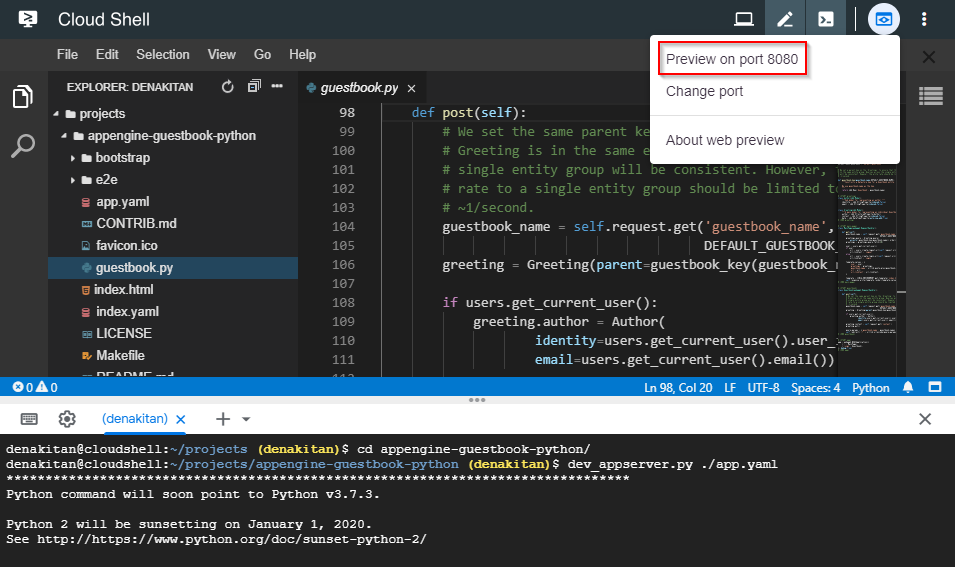 As shown in the previous section, we have a pretty capable development environment running in a web browser that we can use for free.

With Cloud Shell, we are provided with 5 GB of persistent disk storage tied to our $HOME directory. So, keep in mind that only files in your home directory persist between sessions (see Limitations).

What also makes Cloud Shell very convenient is the fact that it comes with many tools pre-installed, such as gcloud, kubectl, mysql, git, vim. And also, with development and deployment tools for Java, Go, Python, Node.js, PHP, and Ruby.

Cloud Shell also has a feature called "Boost Mode". I don't see myself using it much as I tend to run simpler applications on this environment, but it basically increases the specs of the underlying virtual machine for the next 24 hours. It changes the VM's machine type from the default g1-small (0.5 vCPU / 1.70 RAM) to a n1-standard-1 (1 vCPU / 3.75 RAM).

To activate boost mode, find the 'Enable Boost Mode' option under the 'More' menu (the three dotted icon on the top right of Cloud Shell).

Now, let's talk about limitations as these are what will ultimately determine whether or not this tool is suited for your use cases or not. 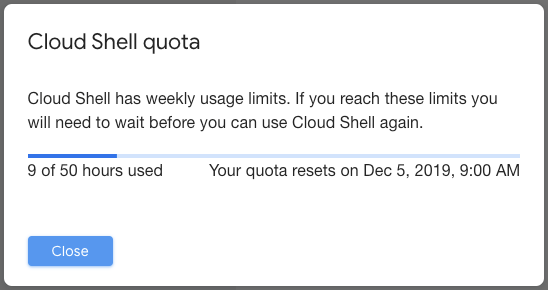 These are what I consider the main limitations, but you can read more about the topic in the documentation.

Although Cloud Shell is not marketed as a Cloud IDE, it can be used as such, so I'd like to briefly mention other tools we can use instead.

Although Cloud IDEs didn't reach the domination suggested by some predictions, I feel they still have their use cases. One scenario where they are very well suited are coding workshops when you want to standardize everyone's environments and get up and running fast and without issues due to the differences in each person's platform. Nowadays, you also find them frequently associated with the use of Chromebooks for development.

In my case, I feel Cloud IDEs are convenient for simpler projects that I want to be able to use in different machines. And Cloud Shell suits this simple need for free with the additional convenience that I'm always logged in to Google services no matter the device I'm using.