How to easily test React components with Karma and Webpack

JavaScript
More than 5 years have passed since last update.

About 8 months ago, I started looking around for solutions for how to test React components but didn't have any good ideas. I first tried out QUnit, which seemed to work fine, but I wanted it to be run automatically. I tried a qunit runner kind of like how the Ember.js project used to run tests, but that ended up being too cumbersome too. I switched over to Karma to test my components, and spent my time building my test assets and loading them up to Karma, but that ended up being kind of slow because I never cached the builds and ran a clean webpack build for each bundle. Ugh. Facebook went on to release Jest and I switched over. I thought it was great, but I quickly ran into some issues: 1) I don't like the module mocking that makes things look like black boxes, 2) I never actually wanted/needed black boxing, 3) it was slow, 4) it didn't install on all of my peers' computers without problem, 5) the documentation was lacking, 6) I had to come up with a hacky way to call it from Node, 7) it didn't work with io.js when I first tried it, 8) I didn't really know how to debug my tests other than by the really long stack traces, and the biggest thing I didn't like was that 9) it didn't run in a real browser.

This post exists because 1) the guys writing react-router are GODS, 2) every other blog post on testing React components I've seen has been super freaking complicated, and 3) because this setup is the best thing I've found wrt React since pure rendering.

What does this look like when you've finished it?

Why would I want this? 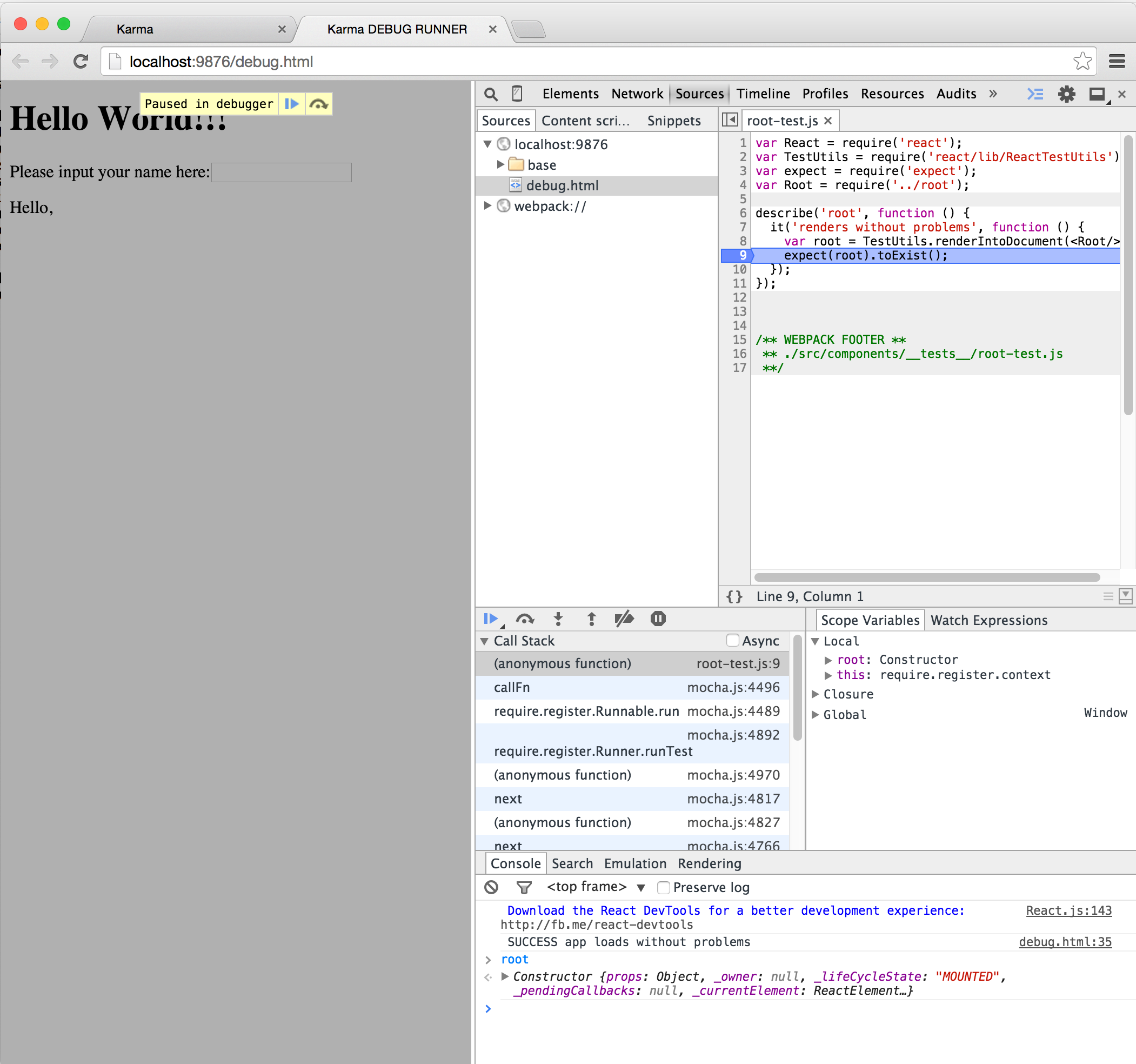 When has testing and debugging with full sourcemaps been this easy???

Okay, how do I get this?

Karma reads from a karma.conf.js file, so let's make sure we set it up right.

Next, we need our single file, which will actually use the webpack require API to find the files we need automagically.

Tests really just need to prove things like 1 === 1, so let's make sure it's easy to understand.

Just a simple karma start will run the tests once. karma start --single-run=false for multiple runs.

And that's about it! Pretty minimal configuration to get a really nice testing environment set up. Big thanks to the react-router guys for having this up on GitHub to follow through.

Making this work with Travis is trivial. Just do a few things.

Modify what browser will run in Travis

Travis only comes with Firefox, so we should change that accordingly.

Install the Firefox launcher, karma-firefox-launcher, and then change your karma config accordingly to browsers: [ process.env.CONTINUOUS_INTEGRATION ? 'Firefox' : 'Chrome' ],. You can also use PhantomJS, if you really want to, using the correct loader.

Add a .travis.yml with the appropriate settings. You'll have to start up xvfb in Travis accordingly to make Firefox work.

And then you're good to go!

It might be worthwhile to see these articles too:

Justin Woo@kimagure
my new posts are on github.com/justinwoo/my-blog-posts
https://twitter.com/jusrin00
Why not register and get more from Qiita?